Queen of My Garden

I grew up with raspberries. A double row, hemmed in with fencing wire which ran to and from the rough cedar end-row supports, wild and untrimmed. Their soil was the very sandy almost-gravel-pit mixture of my parents’ garden. The raspberries occupied the far east end of the large rectangular growing space, closest to the grove of Douglas Fir planted when the First Born was very tiny. The raspberries were always there. Always there, waiting to scratch a careless passerby, waiting to be plucked, playing hide-n-seek with any who wished to taste summer.

Our raspberry plants originated in my Grandfather’s nearby garden. My Granddad, a master with compost, had berries that none could rival. The large, very red, perfectly shaped berries were easy picking and perfect eating. Local lore has him advising that all a raspberry patch needs is plenty of sunshine and plenty of water. I would guess the soil quality made this statement true for him.

When I established my current garden space, I too got raspberry plants originating from my Granddad’s garden, now home to my sister. These plants are an Everbearing variety, any fact beyond that is unknown. I chose the far end of my garden for the plants as they would have plenty of room to sprawl, would face south, starting out with a small 4-foot double row. The row would get enough sunshine over the course of an entire day, but watering was difficult as the large Big Leaf Maple overhead discouraged rain, watering with a sprinkler was not encouraged as it promotes Leaf Rust, and my attempt to tame a series of soaker hoses proved beyond me. I watered with a bucket until I got a long enough hose to reach. The plants survived, though I wouldn’t say they thrived. They suffered neglect due to the more attention grabbing needs of seeds and starts and Obvious Wilt.

When my son was 6, we shifted the raspberries around and planted a new section with the Meeker variety. This new section soon needed to be the Whole Section, so the Granddad berries landed in their current home, just below the Meekers. The Granddad berries are now lovingly part of My Son’s Garden. The east end of my garden is a mass of raspberries, a dwarf cherry tree, and an enormous rose, the grandiflora Sheer Bliss.

I mulch the plants in the fall, remove last year’s dead canes in February, and try to wind the still flexible late-winter canes around the support wires. This is restorative work, restorative to the soul, after everything laying dormant since October’s end.

There is a seemingly unending lag between these little buds starting to leaf and anything green on the canes being visible from the patio-kind of like Alder trees being the last of the deciduous trees around here to leaf. The carefully twisted canes never stay tidy for long. Soon the buds grow into much longer stems, the leaves exhibiting their own agendas, pushing out, getting ready for the coming fruit. 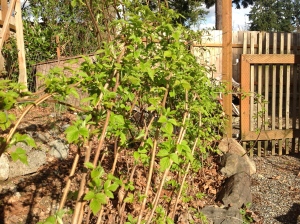 As soon as the berries begin to set, new growth begins happening from the base of each plant. These new canes will grow throughout the season, not succumbing to the more organized, twisted-on-wire nature of the parents. There is often an impulse to tidy the patch, pulling or pruning these junior invaders, but wait! These upstarts are next year’s producers.

By the time the fruit is setting, the plants look green, alive, verdant, full, and ready. Now is the lag between setting fruit and ripening fruit which is always dependent on the sun.

This year we had a hot spell in early May, cooler temperatures and buckets of rain for the 2nd half of the month. Despite our last few June’s feeling more akin to January, this year June was perfect , so the berries started producing just after mid-month. Once that first bit of fruit starts to take on some color, the rest clamor to join in. Admittedly, it is a slow, steady clamor, with the first picking a mere handful, but within a week, there is enough to eat on yogurt, with cereal, to mix into scones, and bake into a kuchen. By the next week, it is difficult to keep up, so every other day a pint of whole berries spends the night in the freezer to be accumulated in a ziplock bag for use later in the year. I already have two gallon-sized bags of berries from my funny patch.

Picking raspberries in my garden is a joy. I make sure that I have time to focus and really look for the sneaky gems. The fruit seems to relish the shade and privacy offered by the crowding leaves, requiring the picker to carefully part branches, turn her head to see under the leaves, crouching to get a glimpse of low-growing bunches, more like practicing the moves of a contortionist than those of a gardener. However, the care and attention are worth a stiff neck and overstretched hamstrings. 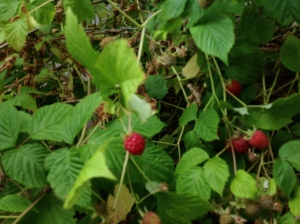 When the fruit starts to slow down, the producer canes begin to dry up, their leaves yellowing despite any amount of water I supply. The young canes remain green and growing but the patch takes on a spent, dismal visage. For my garden, this will begin happening mid-August, and is always a harbinger of Fall. Writing this during the full swing of ripening raspberries, I can make myself feel a bit of the melancholy that will settle over me in a month; but with that melancholy will come such a chorus of gratitude for this beautiful fruit, grown almost effortlessly, with ties to my Granddad, and the hope of yet another season. Over the years, this part of my garden has become my favorite, which if you ever get to see it in person during January, you will perhaps question my sanity. For now, it is lovely in its green, bejeweled with red, giving to any who pass her by. Bon appetit! 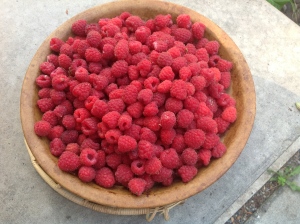 3 Comments on “Queen of My Garden”